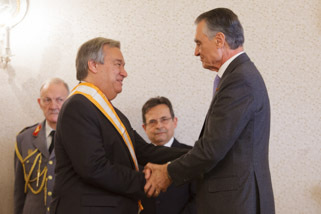 Speech by the President of the Republic upon the Farewell Ceremony of the Armed Forces
Military University Institute, Lisbon, 17 February 2016

As Supreme Commander of the Armed Forces I am addressing today, for the last time, the men and women that serve in the Military Institution.

The Armed Forces always knew how to interpret the wishes and the feelings of their People by providing, in the more relevant moments of our collective life, a decisive contribution towards the building and the preservation of a free and independent Portugal.

Due to their History, their mission and their capabilities, the Armed Forces have had, now and in the past, a unique and irreplaceable role in the defence of Portugal and the Portuguese.

For this reason I have associated them, since the beginning of my mandate, to the celebratory ceremonies of the National Day of Portugal, Camões and the Portuguese Communities, conveying to the public their notable performance at the service of the Country.

In that greater day of Portuguese citizenship, we celebrate our betters, the excellence and the greatness of their deeds, the nobleness and dignity of their ethos, this being the reason why an outstanding and merited place has been reserved there for the former combatants.

A justified tribute to all those who, with notable courage and parental love, gave all they had to their Country, including their own lives.

The exercise of the duties of Supreme Commander of the Armed Forces has its own specificity, unlike any other areas of my political activities. The constitutional charter of the President of the Republic comprises specific competences established in normal legislation, particularly in the Law of National Defence.

The constitutional association of the President of the Republic to the Armed Forces underlines and stresses their eminently national and nonpartisan features.

As the last reserve of sovereignty and structural cornerstone of the assertion of national identity, the Armed Forces must be the object of a culture of commitment and institutional consensus between political forces and the diverse sovereign bodies.

A consensus which has existed and has been shown as indispensable to the commanding status of the service chiefs and to the conditions of stability, cohesion and discipline required for the normal functioning of the Military Institution.

Throughout its existence, the Military Institution has known how to become adapted to the new realities and to the demands deriving from the nature of the threats, to the changes occurred in the international stage, to the political and economic situation of the country and to the development in technologies and deployment of forces.

In the successive reforms to which they have been subject, caution has always been the byword relative to solutions that could minimize the characteristics of the Armed Forces and weaken its intervention capability.

The Country and the Portuguese would be unable to understand the existence of Armed Forces without the readiness and the level of riposte adequate for performing their missions.

During the tem years of my mandate, I closely followed up the issues relative to National Defence and to the Armed Forces and particularly to the respective reform processes. I identified, in this framework, two priorities: the people, as the most valuable resource, upon which must be focused the command, not forgetting those who, already removed from the ranks, are living in weakened circumstances and, in parallel, the operational capability, an essential requisite in the application of the military bearing.

Once the preparation of the legislation that is the framework of the current reform is finished, it will be necessary to ensure the legislative stability and the resources required in order that its adequacy to the proposed objectives may be assessed.

The Military Institution has been a notable school of citizenship. A trustee of noble traditions, it has transmitted and cultivated, throughout its existence, fundamental values such as self-denial and sacrifice, cohesion and discipline, but equally courage and patriotism.

I am proud to have served my Country in the Armed Forces.

There I shared that feeling of belonging and of union that is so peculiar to them; I met good people, professional and sharing. I witnessed the enhanced dedication of the servicemen and the importance of the exercise of the duty of tutelage of the chiefs towards their subordinates.

Today, as in the past, the Armed Forces, even within a complex social and financial environment, continue complying with their duties with exemplary behaviour, both internally and abroad, with competence and dedication, showing excellent performance standards and placing above all else the interests of the Country and of the Portuguese.

I stress the loyalty, the great sense of national interest and the esprit de corps of the Military Chiefs.

It is extremely gratifying, not just as Supreme Commander, but also as a citizen, to ascertain the high prestige and consideration that our servicemen enjoy with the people and with the international organizations and alliances in which we belong.

Such a performance is only possible because it is consolidated by the sound ethical and moral training of the servicemen, based upon a cohesive, disciplined and well prepared structure, timeless marks of the military condition.

The preservation and dignifying of this condition are duties which must be clearly assumed by the State and husbanded with honour and temperance by the servicemen.

Prejudicing or devaluing the military condition results in the weakening of the Nation.

It was an honour for me to have been, for the last ten years, your Supreme Commander.

In this moment of farewell, the message could only be of high esteem, deep recognition, hope and encouragement.

To all of you, servicemen, my salute and my feelings of gratitude, since I am well aware that the motto you follow is only one and the most noble of all. Serving Portugal.