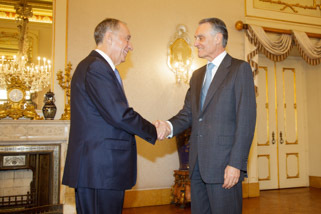 The President of the Republic visited the Armed Forces Hospital, where he was briefed over the resident medical capabilities, as well as with the development plans of that health structure.

Accompanied by the Minister of National Defence, by the Armed Forces Chief of General Staff and by the Chiefs of General Staff of the three branches, President Cavaco Silva attended a presentation of the hospital facilities which he later visited.

Resulting from the extinction, in 2014, through a merger operation, of the hospitals of each of the branches of the Armed Forces, the Hospital has multidisciplinary capabilities, and provides aid to servicemen in operational health, to the Military Family – namely the Former Combatants and the Armed Forces Handicapped Persons – as well as to the civilian population in several specific features.