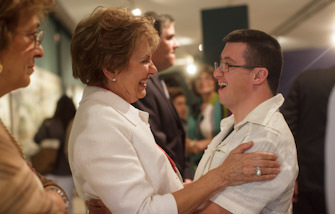 Mrs. Cavaco Silva attended, in Jerónimos Monastery, the First Lent Catechesis addressed by His Eminence the Cardinal Patriarch of Lisbon, D. Manuel Clemente, to whom she later offered compliments, on the occasion of his nomination to the College of Cardinals.

Opening of V Festival of Senses  The Light

Mrs. Cavaco Silva attended the opening of the V Festival of Senses – “The Light”, held in Malaposta Cultural Centre, Odivelas.

This 5th edition of the Festival, organized by the association of Parents and Friends of Mentally Deficient Adults – CEDEMA, celebrates the 13th Anniversary of the Institution.

Mrs. Cavaco Silva visited the “Senior Citizens’ Home” of the Congregation of the Sisters of the Poor, in Campolide, Lisbon, for the granting of donations.

Contemplating Glory  Depiction of the Nativity in Contemporary Art

Mrs. Cavaco Silva visited the Exhibition “Contemplating Glory – Depiction of the Nativity in Contemporary Art”, on show in the Fátima Sacred Art and Ethnology Museum, which comprises approximately 40 Nativity Scenes from her personal collection.

Ceremony in the Knowledge Pavilion

Award of 2015 LOreal Portugal Prizes for Women in Science

Mrs. Cavaco Silva was present, in the Pavilion of Knowledge, Lisbon, at the award ceremony of the 2015 L’Oreál Portugal Prizes for Women in Science.

As included in the programme of the President of the Republic’s trip to Mozambique, to attend the investiture of President Filipe Nyusi, Mrs. Cavaco Silva met, in Maputo, with Mrs. Isaura Nyusi, the country’s First Lady.

On the occasion of the President of the Republic’s trip to Maputo to attend the investiture of the new Mozambican President, Filipe Nyusi, Mrs. Cavaco Silva met with Mrs. Maria da Luz Guebuza, wife of the outgoing President, Armando Guebuza.