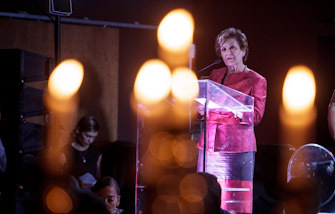 Mrs. Cavaco Silva received, in audience, Dr. Carla Vieira Faria, the officer responsible for the rehabilitation and technical assistance of the site for the support of handicapped people, "Ajudas.com".

Mrs. Cavaco Silva received, in the Palace of Belém, a deputation from the FNAC/AMI Info-Libraries against Info-Exclusion Project.

Visit to the Welcome Centre

Visit to the Home of Colours

Mrs. Cavaco Silva visited, in Lisbon, the Temporary Welcome Centre for children in danger, victims of child abuse and/or negligence – Home of Colours.

Support project for the Library of Guiúa Mission, in Mozambique

Mrs. Cavaco Silva received, in audience, Dr. Margarida Ribeiro Rosa, who presented the project for the support to be provided to the Library of the Guiúa Mission, in Inhambane, Mozambique.

Different means of communication for the handicapped Campaign

Mrs. Cavaco Silva presided, in the John Paul II Centre, in Fátima, at the Closing Ceremony of the Campaign “Different means of communication for the handicapped”, during which she delivered a speech.

Mrs. Cavaco Silva attended, in the Residence of the Ambassador of the United Kingdom, in Lisbon, a solidarity event for the benefit of the Portuguese Palliative Care Association.

Mrs. Cavaco Silva presided, in the Dom Luiz Filipe Theatre, in Lisbon, at the opening ceremony of the 2009 Magic Glow Worm Campaign, organized by the National Federation of Social Solidarity Cooperative Societies – FENACERCI.

Donations from the 2008 Diplomatic Bazaar

Mrs. Cavaco Silva received, in the Palace of Belém, the organizing committee of the 2008 Diplomatic Bazaar and the representatives of the institutions that provide aid to the victims of domestic violence, who were presented with the donations attributed on the basis of the receipts from the Bazaar.

Anniversary of the Salvation Army Welcome Centre for the Homeless

Mrs. Cavaco Silva presided at the celebration of the 12th anniversary of the Salvation Army Welcome Centre for the Homeless.

The celebration was held at the headquarters of that institution for social solidarity.

Introduction of a book