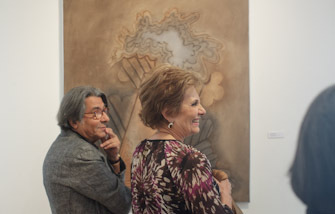 Mrs. Maria Cavaco Silva attended, in Lisbon, the ceremony of the opening of the 2007 Magic Glow-worm Campaign, and of the “Embrace this Cause” Campaign, organized by FENACERCI.

Initiative of the Institute for Child Support

Visit to the institutional exhibitors stands aos "stands" in the Conference Civic Commitment for Inclusiveness
Mrs. Maria Cavaco Silva visited the institutional exhibitors stands present at the Conference Civic Commitment for Inclusiveness, which took place in Santarem, contacting with the activities and initiatives and receiving informative answers from their representatives.
14.04.2007
see more

Mrs. Maria Cavaco Silva attended in the Malaposta Cultural Centre, in Odivelas, the closing ceremony of the Commemorations of the 25th Anniversary of the Association of the Friends and Parents of Mentally Deficient Adults (CEDEMA), where she delivered a speech to the audience.

50th Anniversary of the Clinic of St. Joseph