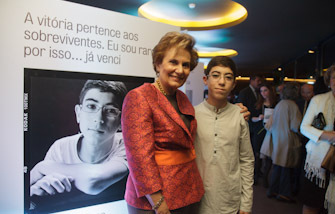 Included in the programme of State Visit that the President of the Republic is carrying out in China, Mrs. Cavaco Silva gave a lecture on Portuguese Literature, based on the work of Sophia de Mello Breyner Andresen, to the 2nd and 4th year students attending the Course of Portuguese Studies in the Beijing University of Foreign Studies (Belwai).

On the occasion of the President of the Republic’s State Visita to the People’s Republic of China, Mrs. Cavaco Silva met, in China People’s Palace, in Beijing, the First Lady of China, Mrs. Peng Liyuan.

Visit to Yu Gardens in Shanghai

Included in the programme of the President of the Republic’s State Visit to China, Mrs. Cavaco Silva took a guided tour of the Yu Gardens, in Shanghai.

Chapel of Our Lady of Good Health

Investiture Ceremony of Our Lady of Good Health

Visit of Mrs. Mary Tan to the National Coach Museum

Included in the programme of the State Visit that is being held by the President of the Republic of Singapore and his Wife to Portugal, Mrs. Cavaco Silva invited Mrs. Mary Tan to view the National Coach Museum.

Mrs. Cavaco Silva attended, in the Galleys’ Pavilion of the Naval Museum, in Lisbon, the opening ceremony of the 2014 Magic Glow Worm Campaign, organized by the National Federation of Social Solidarity Cooperative Societies – FENACERCI

Launching of Give and Take Project

Mrs. Cavaco Silva attended the launching of the “Give and Take” project, a partnership between the ENTRAJUDA institution and the Portuguese Caritas organization, which was held in the Knowledge Pavilion, Nation’s Park, Lisbon.