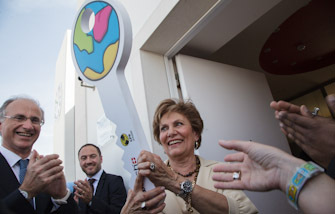 Project A Thousand Toys for a Thousand Smiles

Mrs. Cavaco Silva received, in audience, the President of the Leiria Polytechnic Institute (IPL) Dr. Nuno Mangas, and the officer responsible for the respective Resource Centre for Digital Inclusion, Dr. Célia Sousa, who made a presentation of the project “A Thousand Toys for a Thousand Smiles”.

Mrs. Cavaco Silva attended the ceremony where the Amália Rodrigues Foundation made donations to Institutions of Social Solidarity.

Proceeds from the 2009 Diplomatic Bazaar

Mrs. Cavaco Silva received, in the Palace of Belém, the participants in the 2009 Diplomatic Bazaar, who handed the respective proceeds to the beneficiary institutions of support to Aged Persons.

Concert in the CCB

Mrs. Cavaco Silva presided at the Committee of Honour of the “Concerto em Festa” (“Party in Concert”), laying the corner stone of the future building of the Children’s Museum.

Mrs. Cavaco Silva attended, in the Oriente Museum, in Lisbon, the opening ceremony of the 2010 Magic Glow Worm Campaign, organized by the National Federation of Social Solidarity Cooperative Societies - FENACERCI, where she delivered an address.

Mrs. Cavaco Silva visited, together with Mrs. Maria da Luz Guebuza, the Santo António Care and Tutelage Home, a Private Institution of Social Solidarity, whose mission is to take in and support families at risk.

Mrs. Cavaco Silva attended the Commemorative Ceremony of the Opening of the Celebrations of the 35th Anniversary of CerciOeiras – Cooperative Society for the Education and Rehabilitation of Handicapped Citizens, CRL.