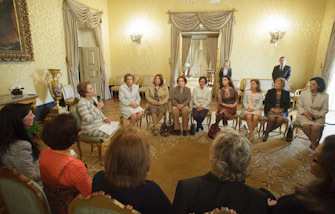 Event with Ambassadresses from Middle Eastern, Asian and African countries

Mrs. Cavaco Silva organized, in the Palace of Belém, an event which brought together the spouses of Ambassadors from Middle Eastern, Asian and African countries diplomatically represented in Portugal, the second of several such encounters with partners of Ambassadors from other regions of the world.

The Ambassadresses visited the Museum of the Presidency of the Republic, which was followed by a performance by fado songstress Carolina. A Portuguese style tea party was served later.