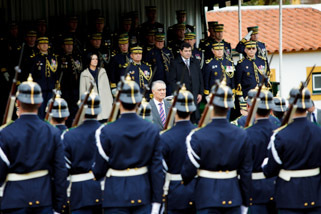 Jorge Sampaio, whose full name is Jorge Fernando Branco de Sampaio, was born in Lisbon on 18 September 1939, son of Arnaldo Sampaio, a doctor who specialised in public health, and of Fernanda Bensaude Branco de Sampaio, who gave private English lessons. He is married to Maria José Ritta and they have two children, Vera and André.

He studied music from a very early age and on account of his father's career spent long periods of time in the United States and in England which had a profound influence on him. He attended secondary school at Pedro Nunes and Passos Manuel Lycées.

In 1961 he graduated in law from the Lisbon University Law Faculty. Whilst at university he was involved in various academic activities that marked the start of persistent political actions opposing the dictatorship. He was elected President of the students' union of the Law Faculty in 1960-61 and Secretary-General of the Meeting of Student Unions in 1961-62. In this capacity he was one of the protagonists of the student crisis in the early 60s, which was behind the protracted and generalised student revolt that shook the regime considerably and lasted until 25 April 1974.

Meanwhile he embarked on an intense legal career embracing all forms of law. He was a member of the board of the Law Association and played an important role in the defence of political prisoners in the Lisbon Plenary Court.

As an opponent of the dictatorship he stood for the elections to the National Assembly as a member of CDE in 1969. He developed constant political and intellectual activities and participated in the resistance movements, working to reaffirm a socialist-inclined democratic alternative open to the new horizons of European political thinking.

After the revolution of 25 April 1974 he was one of the prime movers behind the creation of the Socialist Left Movement although at the founding congress he quickly dissociated himself as he disagreed with the ideological orientation then defined.

During the years of the revolution he played an important role in dialoguing with the moderate wing of the Armed Forces Movement and actively supported the positions of the "Group of Nine". In March 1975 he was appointed Secretary of State for Foreign Co-operation in the IV Provisional Government.

That same year he founded "Socialist Intervention", a group comprising politicians and intellectuals who were to occupy important positions in public life and which generated considerable work of reflection and political renewal.

From 1979 to 1984 he was a member of the European Human Rights Commission of the Council of Europe where he played an important role in defending fundamental rights and contributing to a more dynamic application of the principles contained in the European Convention on Human Rights. He was re-elected to the Assembly of the Republic in 1980, 1985, 1987 and 1991. In 1987/88 he was president of the parliamentary group of the Socialist Party having been responsible in 1986/87 for the international affairs of the Socialist Party. He was also co-chairman of the "Africa Committee" of the Socialist International.

In 1989 he was elected Secretary-General of the Socialist Party which position he occupied until 1991. The Assembly of the Republic appointed him to the Council of State.

In 1989 he decided to run for Mayor of Lisbon and was elected, and then re-elected in 1993. At the time his candidacy took on great political significance and gave local elections national emphasis. As Mayor of Lisbon he and his team asserted a strategic vision with the use of new concepts and methods of planning, management, integration and urban development.

In 1994 Jorge Sampaio decided to run for President of Portugal. He was supported by the Socialist Party and by numerous personalities, both independent and from other political areas who occupied important positions in the political, cultural, economic and social life of the country. On 14 January 1996 he was elected in the first round with 53.8% of the votes. He was solemnly sworn in as President of the Republic on 9 March 1996. His first term in office was in line with his electoral undertakings. When he ran for a second term he was elected in the first round on 14 January 2001.

In 1991 he published a collection of his political essays entitled "A Festa de um Sonho". In 1995 he published a book called "Um Olhar sobre Portugal", giving his views on the country's problems in reply to various individuals from many walks of Portuguese life. His presidential speeches have been published in Portugueses I, II, III, IV, V and VI.

He has received various awards and distinctions.