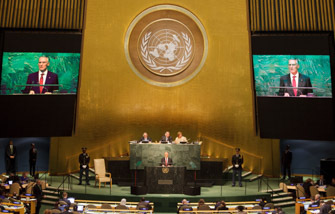 Speech by the President of the Republic at the Award Ceremony of the Key to the Town of Cascais
Cascais, 7 March 2016

I am especially happy, on these final days of my mandate as President of the Republic, to return to Cascais. I wish to express my deep gratitude for the honour that Cascais County Council has seen fit to award when attributing me the title of Honorary Citizen and the Key to the Town of Cascais, which His Honour the Mayor has just handed me.

I cease here the visits that, throughout ten years have taken me from the North to the South of Continental Portugal and to the Autonomous Regions.

I have endeavoured to demonstrate what is best in our Country, to meet the cases of entrepreneurial success, the good examples of social and cultural intervention, and the achievements which interpret the fighting spirit that truly defines us as a People.

I met men and women who drew my admiration for their determination, young entrepreneurs who impressed me with their staunchness.

I closely viewed how, in the midst of our universities, the arousal of projects which are nowadays a gate for the conquering of new markets and for the strengthening of our economy.

And I equally ascertained how, from the Littoral to the Interior, a more than ever closer regard is given to that which distinguishes us, to the differentiating and endogenous elements which may become the lever for local development.

I often pointed out how that the defence of our very rich artistic and architectural heritage should be treated as a priority, not just for the reinforcement of our historical identity, but also as a component of touristic and cultural assertion,

With this purpose, I endeavoured that the Presidency of the Republic should be, as an institution, a reference with respect to the way in which it manages and safeguards the heritage committed to it by legislation.

I wish to take advantage of this occasion to publically recognize the commitment and the intense collaboration provided by the Cascais County Council that made possible the very recent resurgence, very near to us here, of the Cascais Citadel, an imposing monument that had been, for very many years, totally abandoned.

Similar to what had occurred with the refurbishment of the Waterfall Garden in the Palace of Belém, the recovery of the Citadel Palace gave back this monument to the people, who are now able to visit it and become acquainted with its history.

Cooperation with the County Council and other public bodies was decisive and effectively proves that, working jointly, we have always been able to achieve our objectives to the best avail.

I cease, this week, the exercise of the office of President of the Republic. I wish, on this occasion, to assert how very privileged I was to serve Portugal and the Portuguese through these so enormously challenging ten years.

I felt, each passing day, how honoured I was by the trust the Portuguese had placed upon me when they chose me as President of the Republic. To all of you, I am deeply grateful.

I endeavoured to match this trust by always acting, in conscience, in line with the supreme national interest, in complying with the Republic’s Constitution and without sighting any other than a better future for the new Portuguese generations.

Far exceeding political cycles and the environment, I have witnessed that this is a Country that does not give up and a People that honours victories, conquests and the Discoveries that embody our History.

I end my duties with the redoubled certainty of the grip and the mastering qualities of the Portuguese, with the same faith in a future of greater cohesion and social justice for our country, with the same hope in the achievement of the objective that always guided me: that of all of us jointly attaining the building of a greater Portugal.

Thank you very much.