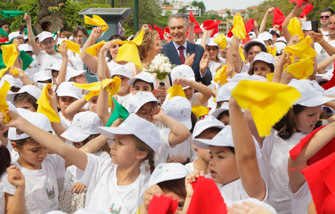 At the end of the second day of the activities comprised in the Route to a Dynamic Economy, held in the Madeira Autonomous Region, the President of the Republic closed the 7th Campaign of this initiative in a session during which he delivered an address.

With the presence of many of the individualities involved in the Route’s Campaign the President of the Regional Government, Miguel Albuquerque, voiced his appreciation for the promotional action covering the innovatory projects in Madeira’s economy.