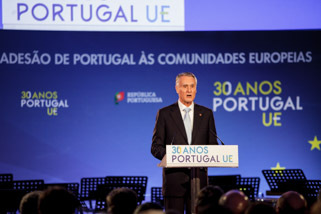 Award of the Citys Gold Medal

The President of the Republic attended a Welcoming Ceremony held in Lamego County Hall, which signalled the celebration of the National Day of Portugal, Camões and the Portuguese Communities in that city.

Before arriving in the County Hall, where he unveiled a plaque allusive to the occasion, President Cavaco Silva crossed the square fronting the building, where he was greeted by hundreds of children from the local schools singing the National Anthem, as well as by hundreds of people surrounding the Republic Gardens.

During the welcoming ceremony, and after the speech of the Mayor, Eng. Francisco Lopes, President Cavaco Silva received the City’s Gold Medal, awarded by the County Council.

Later, the President of the Republic addressed a speech allusive to the celebration of June 10th in Lamego.