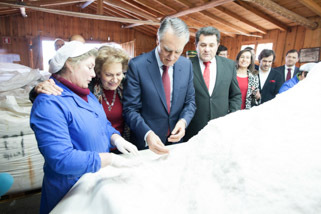 The President of the Republic returned to Parliament, for review, Parliamentary Bill No. 7/XIII, which introduces alterations to the rulings on adoption by same gender couples

The President of the Republic returned to Parliament, for review, Parliamentary Bill No. 7/XIII, which introduces alterations to the rulings on adoption by same gender couples.

Following is the full text of the Message that, concerning the above issue, the President of the Republic addressed to Parliament:

Having received, on 4 January 2016, for enactment as law, Parliamentary Bill No. 7/XIII, which «Suppresses discrimination in the access to adoption, naming civil godfathers and other juridical family relationships, carrying out the second alteration to Law No. 7/2001, dated 11 May, the first alteration to Law No. 9/2010, dated 31 May, the twenty third alteration to Civil Registration Law, approved by Decree-Law No. 131/95, dated 6 June, and the first alteration to Decree-Law No. 121/2010, dated 27 October» I have decided, in the terms of Article No. 136 of the Constitution, not to enact that bill based upon the following premises:

2 – In effect, both the regime of civil partnership – approved by Law No. 7/2001, dated 11 May – and the regime of same gender marriage – approved by Law No. 9/2010, dated 31 May – excluded the possibility of adoption by same gender couples. Without prejudice to the controversy generated by the approvals of those bills, this option resulted from the pondering by the legislator of the several existing interests and, very particularly, the imperative need to safeguard, in any circumstance, the supreme interest of the minors concerned.

3 – Indeed, it is consensual that, in the matter of adoption, the child’s supreme interest must prevail over all those remaining, specifically those of the adopting persons. The interest of the child is the master guideline that must steer not just the legislative options on adoption but also the decision of the respective administrative procedures.

4 – Not by chance, the law currently in force establishes that a strict control procedure must be observed regarding requests for adoption, thus endeavouring to guarantee the soundness and the stability of the new parental ties in situations of great delicacy for the children, often subjected to mistreatment or abandonment at very early ages.

5 – What is presupposed in the Bill in question is the existence of discrimination between couples with different and same genders with respect to adoption. However, as stated above, the institution of adoption must be ruled by the child’s supreme interest.

6 – In this respect it should be stated that the argument according to which the ruling solution now approved would result from a constitutional or legal imposition is devoid of any sense, since the principle of equality does not necessarily impose the solution now consecrated.

7 – In a similar situation, concerning same gender marriage, the Constitutional Court, in judgements 359/2009 and 212/2010, asserted the following: “if these comments are generally pertinent, more will so be when, within the juridical community, differentiated perspectives and differing and non-coincidental points of view are in progress concerning the results or implications that must be withdrawn from an ”open” principle of the Constitution to be applied to a certain field or for the solution of a specific juridical issue. In such a situation – whenever it is necessary to recognize and accept as legitimate, in the juridical community, an overall perception or conceptual “pluralism” – it will surely be the duty of the legislator (the democratic legislator) to opt and decide”.

8 – This means that, in line with the jurisprudence of the Constitutional Court, equality of treatment between different and same gender couples is essentially a matter belonging in the field of the legislator’s freedom of conformity, and no constitutional imposition may thus be withdrawn from it.

9 – It has not yet been shown in what measure the legislative solutions now approved promote the child’s wellbeing and are guided as a function of its interest. In effect, a group of renowned jurists and Law professors who addressed an exposé on the Bill to the Presidency of the Republic sustain that the regime was approved “based on off-centred principles of the juridical wardship of these children”.

10 – Independently from consecrated juridical solutions, legal changes in the adoption issue have deserved from the legislator a wide public debate, endeavouring to involve the whole of civil society and equally hearing the opinions of specialists from the most diverse ideological or amply perceptive quadrants. This must obviously be understood in areas of such great social, ethical and political sensitivity.

11 – Thus, for instance, the legislative process regarding co-adoption was commenced during the previous legislature, which involved almost twenty auditions of associations and specialists, and the procedure was not concluded.

12 – This wide debate occurred, as it should be recalled, regarding the possibility of co-adoption which, however controversial, has a much more circumscribed context than that of the current legislative initiative, since it is limited to cases of adoption by the spouse relative to pre-existing paternal ties.

13 – Now, however, contrary to what came about in the case of co-adoption, the Bill under consideration is a radical and much deeper alteration in our legislature, allowing the full and unrestricted adoption by same gender couples, which had always been excluded by the legislation in force, even in that, it should be stressed, that approved the possibility of same gender marriages.

As such, independently from obtaining a thorough opinion on the legislative solutions comprised in this Bill, it should be ensured that such a relevant change in an issue of such great social sensibility does not come into force without being preceded by a wide and clearly defined public debate, involving multiple social undercurrents and specialists in diversified fields, enabling the consecration of a legal solution which consensually guarantees that the supreme interest of the minors is primarily protected in adoption processes.

For this reason I have decided to return to Parliament, without enacting, Bill No. 7/XIII.

The President of the Republic