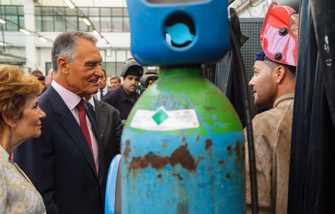 Duties of the President

Who is the President of the Republic and what does he do?

His powers are much closer to the idea of a moderating power (particularly his powers of control or negative powers, such as the veto, although the Head of State, besides these duties, also has competence in political guidance, especially in the event of political crises, in times of a state of exception and in matters of defence and international relations).

However, over and above this, the President of the Republic may make particularly intense use of the symbolic attributes of his position and of his important informal powers. Under the Constitution he is charged, for example, with expressing his opinion on all serious emergencies affecting the life of the Republic, addressing messages to the Assembly of the Republic on any matter, or being informed by the prime minister about matters invoicing the countrys domestic and foreign policy. All the ceremonies he attends, his speeches, his communications to the country, his travels in Portugal and abroad, his interviews, his audiences or contacts with the people, these are all political opportunities of extraordinary scope in mobilising the country and the citizens.

Qualification of the president as representative of the Republic and guarantor of national independence means that the president, while not exercising direct executive duties, may therefore play an active and conforming role.