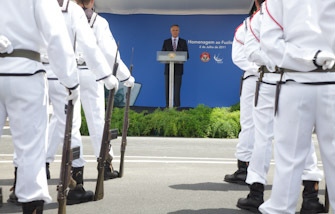 Presentation of the Naval School

The origins of the Naval School go back to the mythical Sagres School, created by Prince Henry the Navigator, and to the Class of the Senior Cosmographer founded in 1559 under the guidance of mathematician Pedro Nunes.

The current Naval School was founded in 1782, named Royal Academy of Midshipmen, and was set up in Terreiro do Paço, in Lisbon. The mission of this academy was the training of the officers of the Royal Navy.

At the time of the Napoleonic invasion in 1807, the Royal Academy of Midshipmen was transferred to Rio de Janeiro, together with the Portuguese royal family. When Brazil became independent, in 1822, the academy was divided in two, a Portuguese and a Brazilian. The Portuguese academy was again set up in Lisbon in 1825. The Brazilian academy gave rise to the Naval School of Brazil.

In 1845, the Royal Academy of Midshipmen of Portugal was renamed Naval School. The school’s facilities continued in Terreiro do Paço, in Lisbon, until it was transferred, in 1936, to Alfeite.

The Naval School is currently a Military Higher Education Establishment, with the main mission of training its students to become Officers of the Portuguese Navy.

The Naval School has a complement of 70 military and civilian teachers, who associate their teaching duties with a vast professional experience.

The Student Corps is divided into 5 companies, each company representing one of the years of admission, numbering a total of approximately 270 students.